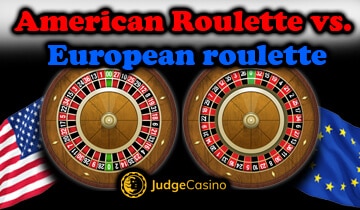 Over the following few sections, we will look at the fundamental things that separate the two games and explore the odds, probability and payout changes that occur. Let us start straight away by looking at the main differences as we delve deeper into our American vs European roulette guide, but you can also learn basically how to play American Roulette from our updated guide.

The key differences between American Roulette and European Roulette

The biggest thing to note is that the American Roulette layout (with its two zero pockets) accounts for a 38-pocket wheel; meanwhile, the European Roulette layout, with its single zero pocket) makes for a 37-pocket game. Eliminating the zero pockets, both have 36 numbered red or black pockets spread across various parts of the wheel.

🥇 Best online casinos where you can play European roulette [2021]

How does the 00 impact the odds, payouts and the house edge?

However, how the numbers and options work regarding roulette payouts is not as straightforward as that. Despite the differing house edge and probability of success with different bet types, the payouts (in terms of money) remain the same in both games. You will always pocket a 35:1 prize for a straight up bet, single number win in American Roulette and European Roulette.

American Roulette also uses its double zero in another way. In American Roulette, you can bet money on the zeros (known as a Five-Number Bet). We will look at that in just a moment. For now, though, one of the best ways for you to understand European vs American roulette odds (in particular European roulette odds) and house edges is to study the chart below.

Payout (in both games)

There is another option, which can be brought into the American vs European Roulette wheel debate. At this point, it is worth noting that there is also a game called French Roulette. For the most part, French Roulette is identical to European Roulette, albeit with fancy-sounding names for the different types of betting options. However, French Roulette allows the inclusion of the En Prison and La Partage rules. This potentially allows you to drop the house edge to 1.35%. In the following sections, we will show you how this is done.

The bets you can find in American vs European Roulette

Choosing American Roulette vs European Roulette can sometimes come down to the house edges involved. Your decision may also be based on the available bets, though. Let us explore these options next:

Both American and European Roulette allows you to place the same types of wagers for the most part. These consist of:

Inside Bets: Those wagers include Straight-Up, Split bet, Street bet, Corner bet and Line bets. These are less likely to occur but deliver more extensive winnings.

Outside Bets: The best numbers to play roulette for rookies are those involved in outside bets. Roulette outside bets include lows, highs, odds, and evens, reds, blacks, dozens, and columns. These are more likely to occur; hence they pay out less.

A few special bets also appear in each game. These include:

Call Bets: Also known as Racetrack bets, include Voisins du Zéro, Jeu Zero, Tiers du Cylindre, and Orphelins. These are bets which cover multiple wheel sections and involve a series of chips placed on various bets. They are commonly found in European and French Roulette games.

Both types of added bets require a fair bit of research and practice. Do not hesitate to read our guides on them to learn more about how they work.

Earlier, we mentioned that in the battle between American Roulette vs European Roulette, there is a chance to lower the house edge. Now let us return to that and explain our reasoning in greater detail.

European Roulette and French Roulette are games that can commonly be played with the En Prison rule. If you place an even-money outside bet and the ball lands in the zero, then you can choose to leave your bet “imprisoned” for the following ball spin. If you win with the next bet, your stake is returned. In a manner, the En Prison rule acts as a second chance feature.

For the most part, American Roulette lacks these options. There is one exception. A scant few American roulette games (namely those based on Atlantic City rules) may have a Surrender Rule. This works in the same way to La Partage, in that if you land a single zero or a double zero on an even-money, outside bet, you will get your stake returned. This effectively cuts the house edge (again, only on specific bets) from 5.26% to 2.63%.

In the grand scheme of things, when it comes to European roulette vs American roulette, the former is far more popular. However, there are reasons why some players prefer to opt for the latter. Let us take a final look at why:

✅ Lowest roulette house edge: If you really want to lower the house edge and cover the wheel, we recommend French Roulette over any other game.

✅ More variants: There seem to be more versions of European Roulette than its counterparts. RNG games such as European Roulette Gold and high stakes roulette games in live dealer format are common. American Roulette variants are rarer and less appealing, such as the very unconventional Triple Zero Roulette.

Before you leave, take one last quick look at the key differences, and imprint them in your memory. This will serve you well when you decide what to play…