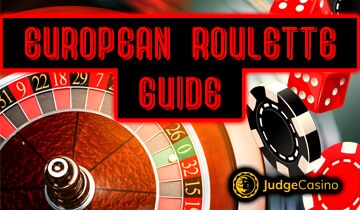 If you like to play casino table games in their original form and take advantage of higher payouts, European roulette will be the best choice for you.

This is the most common variant of roulette and it is very popular among players: You can find it in almost every online casino.

If you are thinking about trying European roulette online, make sure to read our guide first: We explain the roulette rules, payouts, and betting options of this variant.

Moreover, we share a couple of roulette strategies that work.

This will be a guide to playing roulette with European rules and it contains everything you need to know: Let’s start.

Top 10 online casinos where you can play European roulette [2021]

What is European roulette game?

Roulette is a game that originated in France (so, Europe) in the 18th century and historians do not agree on who invented it. However, most researchers believe that the game was invented by the famous French mathematician Blaise Pascal. The object of the game is to predict where a ball thrown on a spinning wheel will land.

There are numbers on this wheel and each one is a different color (black, red, green). Players can bet on a specific number, a range of numbers, a color, or whether the outcome will be an odd or an even number.

When roulette was introduced in the United States, another number was added to the wheel to increase the advantage of the casino, and casinos started to offer some additional betting options that were not in the original game. Today, European roulette is the name of the version of the game played according to the original rules, numbers, and betting options.

Since it is the most common variant, it is the first game that comes to mind when someone says “roulette online”. As we will explain below, it is also more advantageous for the player compared to American roulette, and this does not change even with variants such as European Roulette Gold.

European roulette vs. American roulette: What is the difference?

Thing is, the double zeros increase the house edge percentage of the game (so it favors the casino) and basket bet is known as “one of the worst bets in roulette”. In short, while the general rules are the same, the American variant of this game offers less RTP (return to player) and should not be preferred, especially if you are playing high stakes roulette online.

Let’s keep explaining European roulette with some visuals, so you can understand what your goal is. We will start with the European wheel layout.

These are the European roulette wheel numbers: As you can see, there are 37 numbers in total. According to European roulette rules, you can place a bet on any number (i.e. red 7), a range of numbers (i.e. 4, 5, 6), a color (red or black), or the type of the outcome (whether the number will be odd or even).

The dealer spins this wheel, throws the ball on it, and players can place their bets until the wheel stops spinning. Speaking of placing bets, you can do this by placing your chips on the roulette table. This is what a European roulette table looks like:

While it looks complex at first sight, the table is actually quite simple and easy to understand: Each option on this table represents a different bet. For example:

If you are playing the classic European roulette online without any side/bonus bets, the house edge will be 2.70% (1/37). Naturally, the RTP percentage will be the opposite of that: 97.30%.

This means for every 100 EUR you deposit, you can win 97.30 EUR back in the long run. To give you an idea about why you should prefer European roulette, let’s state that the house edge of American roulette is 5.26%.

According to which numbers are included, there are two bet types in online European roulette: inside and outside bets. This distinction is based on the placement of numbers on the roulette table (inner-outer sides of the table), we can say that it is also based on how many numbers you bet on. Take a look at the roulette outside bets & roulette inside bets table below to understand what you are actually betting on:

This table also shows the best numbers to play in roulette: However, since we have a separate article for this, we will just state the obvious here: You can learn more about this topic by reading our other articles.

How to play European roulette?

Whether you play free European roulette or try your luck with real money, the steps you need to follow are the same:

Step 1
Start by placing your chips on the bet option you picked. For example, if you want to place a straight bet, place your chips on a single number on the roulette table. You can do so by dragging & dropping the chips with your mouse and you can click multiple times to increase the bet amount
Step 2
Click the “spin” button
Step 3
The wheel will spin automatically and display the result in a few seconds. If you win your bet, you will be paid according to the paytable we shared above. If not, repeat the same steps until you win

There is no difference between live European and online European roulette: Both are the same game and offer the same rules, payouts, and betting options. The fact that you are playing against a real dealer does not change a thing: You are still playing the same game.

This means you can use the same strategies too, such as the Martingale roulette strategy and Fibonacci roulette strategy. Obviously, however, one is played in real-time against a real person and the other is played against a “computer”, so the experience will be slightly different.

There is no perfect European roulette strategy, but we can share a couple of roulette tips & tricks that will increase your winning chances.

You can’t. Each spin is different and the results are random. Mathematically, there is no way to guess which number will be the next result: The odds and probabilities are “reset” at each spin.
All of the outside bets (odd/even, red/black, low/high) will be the best options due to their high probability. You can also prefer dozen/column bets, they offer a nice risk/payout ratio.
Place your chips either on red or black: As long as the color of the outcome matches your pick, you will win the bet, no matter what the actual number is.
If the casino has a “live dealer” section, you can. European roulette is the most common variant of this game and it always has a live casino version too.
The payouts of roulette do not differ according to the variant. Straight bet, for example, always pays 35:1 in all roulette types. The probabilities of these bets, however, are different and better in European roulette.
You can use the images & tables we shared above. However, unlike blackjack, you don’t need to make the “better choice” on each hand: A cheat sheet won’t be that useful.
Sure you can. Like all other popular casino games, European roulette can be played on mobile too, no matter what your device/operating system is. In addition, no download is needed for mobile roulette.

That’s it: You have learned what European roulette is, how to play it, and how much the bets pay. You can start playing it right now by choosing one of our recommended online casinos: Each of them offer multiple online European roulette games to play and the best bonuses to use.

We are sure that you will enjoy European roulette online: Make sure to read our other articles to learn more & increase your chances. Read our guide about the highest number on roulette wheel and see which are the odds of winning. As always, we wish you good luck: See you at the tables!