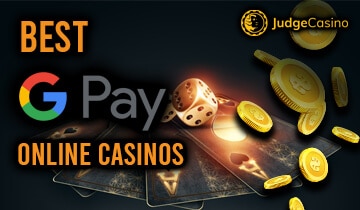 We use Google in almost every aspect of our lives, so it is not surprising that Google Pay casino sites exist.

Google, a technology giant, also offers its own electronic payment solution and can reach a much larger user base compared to similar services.

Google Pay casino payments are available in almost all of the US and Europe: You can complete all gambling deposits within seconds using just your Google account.

The number of Google Pay online casino sites is growing, and this is the best time to meet this new payment method: Below, you can find answers to every question you wonder about Google Pay casino payments and a list of instant play casino sites that support it.

Everything you need to know about Google Pay

Google Pay is a digital wallet developed by Google that started operating in September 2015 as “Android Pay”. It can also be used on iOS devices in the US and India, but in the rest of the world, it will only work on Android devices (and desktop PCs). In 2018, it changed its name to “Google Pay” and became a true online payment tool.

It works like an electronic wallet service such as PayPal, Neteller, and Skrill: You open an account, add a funding source into it (i.e. credit card), and start using this source for all your payments. However, as Google Pay can be used on all Android devices and is part of the Google ecosystem, it reaches far more people. With Google Pay:

Payments for Google Pay are made in the local currency in each country, which means all supported countries can use their own currency. Payments are not subject to transaction fees in any way and this is valid not only for users but also for merchants.

To use the Google Pay system, you must have a Google account, but there is no obligation to use a mobile phone: You can also manage your payments from any browser where you can log into your Google account.

In other words, you can make all your payments by authorizing them with your Google username and password. We also recommend installing the Google Pay app to pay from mobile phones (and get a smoother experience on mobile casinos that accept Google Pay). Note that there is no separate Google Pay casino app: The standard application can be used for all payments, including Google Pay casino deposits.

Google Pay is just beginning to be used in online gambling and the number of casinos that support it is currently limited. But in 2021, Google Pay plans to serve as a virtual bank account and, for example, distribute debit cards: When this happens, we will be able to use it in many more casinos.

For the answer to what online casinos accept Google Pay right now question, you can use this guide and our website: We list all casino sites that support this method.

Google Pay is one of the best casino payment methods you can use, especially on mobile. And it is a very easy to use method too: You can create a Google Pay account in no more than 5 minutes.

Step 1
Visit https://pay.google.com/ address from any device (mobile/desktop)
Step 2
If you already have a Google account, log in. If you don’t, create a Google account first (you can do so from the same page)
Step 3
Since this is your first time using the service, you must add a payment method first. Google Pay supports debit and credit cards. If you are living in the US; you can also add a bank account

That’s it: You can start to pay with Google Pay now. Check our list of casinos that accept Google Pay, pick one, and make your first deposit. If you do not live in the US but still want to use your bank account to make casino deposits, we recommend checking our articles for Trustly casinos and Euteller casinos.

How to use Google Pay at online casinos?

Making a Google Pay casino deposit is very easy and resembles Pay N Play casino payments: You just use your Google username and password. To explain step by step:

Step 1
Log in to your Google Pay casino account and open your profile page
Step 2
Select “Google Pay” from the available payment options after clicking the “Deposit” button
Step 3
Enter the deposit amount
Step 4
If you are using Google Chrome, your Google account information is already registered in the browser. Therefore, you will only see a screen asking you to confirm the transaction
Step 5
If you are using a browser where you are not logged into your Google account, you will be asked to do so on the next screen, after which you will be asked to confirm the payment
Step 6
The deposit will be completed within a few minutes after confirming the transaction

Google Pay casino withdrawals are not possible - For now

In 2021, eleven banks in the US will start offering accounts in Google Pay. Moreover, Google will release its own debit card globally – it is available only in the US (and in selected regions) for now. When these happen, we will be able to make a Google Pay casino withdrawal too.

The thing to remember here is this: These bonuses are almost always offered not because you use Google Pay, but because you make payment. In other words, you can get the same bonuses with payment methods such as RoyalPay casino, VISA casino, and POLI casino.

As explained above, when you make a deposit at a Google Pay casino, you are actually paying with a card and/or bank account that belongs to you. Google Pay acts as a payment gateway (similar to PayVision casino and PayOp casino payments) so it does not have any limits.

Pros and cons of paying with Google Pay at online casinos

No. Gambling is considered illegal in the United States (with a couple of exceptions) so there are no Google Pay casino USA sites in this country. However, you can still find Google Pay online casinos that accept US players & support USD payments.
For the same reason, there are no online casinos in Australia: Gambling is not legal in this country too. But players from Australia can still play at Google Pay casino sites all over the world.
Sure you can. There is a native app for Android and iOS. However, the iOS app can only be used in the US and India.
No. A Google account is a must but you also need to add a funding source (credit card/debit card/bank account) to this account.
No. We shared the list of countries above where Google Pay can be used. If your country is not on this list, we recommend checking our guides for Ecocard online casinos, top online casinos that accept Paysafecard, and MasterCard casino sites.

We already picked the top Google Pay online casinos for you

If you want to play at Google Pay casino sites, this is the best time: We already picked the top Google Pay online casinos for you. They all offer thousands of games and dozens of bonuses – you can make your first deposit with Google Pay and start playing immediately.

We will continue to add new casinos that support this payment method so don’t forget to visit us often. We wish you good luck out there!