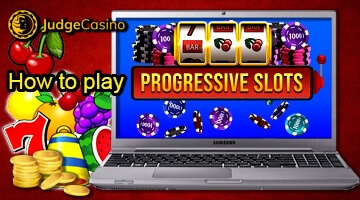 This is not an exaggerated claim, there are dozens of progressive slots that can make you a millionaire with a single spin.

Even a single one makes lots of players millionaires each year: Mega Moolah, which is one of the best bonus slots, pays an average of 60-70 million Euros a year.

In other words, if you choose the right progressive jackpot slots, you have the same chance: You just need to learn more about progressive slot machines (that some consider to be the best online slots).

Well, today is your lucky day because we have prepared this guide for exactly this purpose: Below, you can find the answer to every question you wonder about progressive system slots.

Let’s start with a basic question: How do progressive slots work?

What are progressive slots and how do they work?

Understanding progressive slots require us to start from the basics. So let’s start by answering the question of what is a progressive slot machine. This term is actually used to denote a feature that regular slots have.

In other words, progressive slots are actually regular slots and they can fall into one of the “classic slots” or “video slots” categories depending on the features they have. But no matter which category they fall into, they have a steadily rising reward. (That is why it is called progressive.)

In other words, in addition to the standard payouts of the symbols, there is a big reward that can be won and the amount is not fixed. For example, a pirate-themed video slot game will be referred to as “pirate slots progressive machines” if it has a steadily increasing grand prize.

So, how does this happen? Why is the reward constantly increasing? The “secret” of the progressive slot machines is the losing players. Every lost bet feeds the pool: Each game lost will cause the prize to increase even more until a player wins.

So, for example, if there is a progressive slot that has exceeded one million Euros in prizes, this means tens of thousands of players have tried their luck but lost.

How big can progressive jackpot slots be?

The max progressive payout on slots can be much higher than you might have expected. In general, progressive slots have no maximum payout limit. In other words, the amount of reward continues to increase with every game played until someone wins.

Sometimes, the reward amount can reach millions of Euros. In this regard, the world record belongs to the Mega Moolah game developed by Microgaming. The biggest jackpot in the world is approximately 18 million Euros and paid in October 2015.

It is possible to divide progressive slots into three basic categories. However, it should be noted that this distinction applies mostly to land-based casinos.

For online progressive slots, these categories do not matter much because they already use a common pool thanks to their digital infrastructure. Below, we will explain what this means in more detail.

How often do progressive slots payout?

It is not possible to give a clear answer to this question for two reasons: First, only the developer can see the win/loss statistics. Second, even if you can see these statistics, they have no meaning, because there is no way to know when progressive slots will pay.

So, you cannot predict when the payout will take place by looking at the results of the previous games: Each spin is independent of each other and the winner is determined completely randomly.

In other words, it never paid during the first four months of 2020, but paid twice in a row in a month. Nobody knows why, because the results are completely random. The next payment could be in 2021 or the next week – nobody can tell.

How to win progressive slots?

The way to win the jackpot prize is different in every game. So there is no single rule that applies to all progressive slots: Each game uses its own rules.

You must check the paytables to find out the winning conditions. For example, if you are playing Playtech slots, each of them has a paytable, and here is explained in detail how to win the jackpot.

That being said, it is possible to say that there are two common ways to win the jackpot:

There are also games that have a grand prize but with a fixed amount. In other words, the amount of prize is predetermined and does not increase with every game played. These are called “fixed” jackpots.

When compared with progressive casino slots, it is possible to say that they have some advantages. For example, their RTP values are higher, so you are more likely to win the grand prize. However, the amount of this prize will never reach the level of progressive slots.

This is a personal preference: If you prefer low reward but a high chance of winning, play fixed jackpots. If the important thing is the size of the prize, choose progressive jackpot slots.

We believe that these are truly the best progressive slot machines you can play. And we also picked the best casinos to play them so you don’t waste time: You can see the list of casinos that offer you these games (and all other new slots) in this guide too.

We constantly update our lists of games and casinos; you don’t need to use a progressive jackpot slots tracker. Just make sure to visit us often and find new progressive slots & casinos each time. From Netent slots to Pragmatic Play, we always pick the best payout slots for you.

Progressive vs non-progressive slots: Which one should you prefer?

This is a personal question as both types of games offer a different experience and you have to try it personally to see which one is right for you. It makes no sense to choose a winner in this comparison: You should try and see for yourself.

In general, we can say that regular slots pay more frequently, but the amount of payouts is lower. So if you want to win often but less, choose them. If you join a $5 minimum deposit casino Australia site regular slots are more suitable for you, as a low budget player, because you can win a prize much faster, before blowing their entire bankroll.

For example the Thundercats Slot is a non progressive slot but its prizes can peak at 400x times a stake with the maximum limit per spin.

Progressive slots can make you a millionaire, but each spin will cost more and your winning time will be much longer. In other words, you need to spin a lot more until you win something. This requires a higher bankroll.

If you have the budget to play high roller slots, you can easily try progressive slots too. In any case, you have to decide according to your personal preferences and bankroll.

Your chances of winning progressive slots are completely random. However, by using some progressive slots advantage play techniques, it is possible to increase this chance slightly. In this regard, we recommend using the tips below:

Pros and Cons of playing progressive slots at online casinos

It means that the grand prize of the slot machine keeps increasing with every game played. It is not a fixed figure and it can reach a quite high amount, sometimes millions.
This is up to you. They are one of the most popular slot games and as fun as regular slots, but the payout frequency won’t be that frequent. In other words, winning will take longer and require a bigger bankroll.
All of the online progressive slots will pay sooner or later. So, in a way, all of them “must pay”. However, no one can say when this will happen. But it is possible to say that you have a higher chance in games that have not paid for a long time.
Prefer games that have not paid for a long time, make sure the RTP rate is over 90%, and play with the maximum bet as long as possible. Other than that, there is no magical progressive slots strategy that will “guarantee” a winning, such a thing is impossible.
Yes. In general, progressive jackpot slots RTP is lower than regular slots. Naturally, this affects the payout frequency. However, since the prize is progressive, this is normal: You can’t expect to win as fast as in regular slots.
Any of our recommended casinos will do. They offer you the chance to play free progressive slots no download, without any limitations. You can switch to progressive slots online real money anytime you want.
Sure. Modern progressive jackpot slots (i.e. Evolution Gaming slots) are compatible with all devices & platforms. You can easily play on mobile and have the same features: Mobile progressive slots are as advanced as their desktop “cousins”.

After reading our “progressive slots explained” guide, you now know much more about progressive slot machines. You know how they work, how they pay, and most importantly, how to win them.

It is time to put your knowledge to the test: We listed the best casinos to play hundreds of progressive slots, so pick one and start trying your chances today. The next spin can make you a millionaire: Good luck!