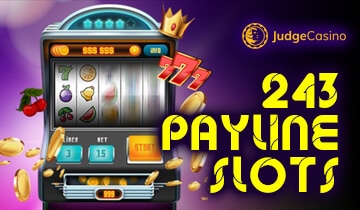 Video slots are the most popular games and not surprisingly, they represent a significant percentage of the collections of online casinos.

Among them, 243 payline slots are preferred by both amateurs and veterans because of the high frequency of winnings.

In this guide, you can take a closer look at the best online slots that have 243 winning combinations and see how you can benefit from having more opportunities to win.

Paylines vs ways to win in slots

To get a better understanding of the 243 ways slots we first need to understand the difference between them and those whose winnings depend on fixed pay lines. Both have a paytable that players can compare before spinning their reels and provide information about the average RTP. Some of the most popular casino slot machines have the 243 ways to win format, as they provide more lucky combinations.

On a payline, you must have the slot machine symbols lined up on the same active line to create winning combinations. This explains why paylines come in smaller numbers, as you can only have between 3 and 40 or so active winning lanes. Anything that exceeds this threshold falls into the category of slots that have pay once for all lines, including the famous jackpot games that are popular for their progression system.

Another distinction comes from the manner in which the winning ways are counted and this depends on the grid format. The 5×3 reel grid is the standard for slots and the one that produces the 243 ways to win payline structure, but the framework shows a lot of flexibility. That’s why it is possible to spin the reels of slots with megaways and up to 4,096 ways to win which are among the best online games to win money.

These are the key elements to consider when looking at the real money slots and trying to figure out if they belong to the pay line variety (like 20 line slots) or our 243 ways to win slots. The latter have a standard structure, with 5 reels and 3 rows, like do all ‘ways to win slots’. This helps them stand out from the crowd from slots with regular paylines. The 243 payline slots have wild and scatter symbols, free spins and bonus games just as other types of slots. So in this aspect there is no diference between them.

The main characteristic of 243 payline slots games is that players win whenever identical symbols appear anywhere on the screen. This means that it is easier to win with slots with 243 paylines and if multiple winning combinations are created, the profits are greatly increased. Beginners appreciate the opportunities provided by 243 line slots not only because of their frequency but also simplicity. You don’t have to worry how many lines should I play on a slot machine as the profits depend exclusively on your stakes.

How do 243 payline slots work?

One of the first things that is worth discussing in order to understand how do 243 ways to win slots work is where does the 243 number come from. This is the result of the game structure which has five reels and the number of winning combinations increasing exponentially. If you multiply 3x3x3x3x3, you realize how the wins are calculated for other games that use the same system but have more rows.

Once you know what does 243 ways to win mean it is easy to calculate the manner in which some of the best payout slots trigger winnings. Microgaming slots and Netent slots are famous for offering some of the highest winning combinations, including some games with progressive jackpots. Essentially, they offer more frequent profits than the standard 243 ways video slots at the exchange of smaller amounts.

How are wins calculated in 243 ways slots?

There is an indissoluble link between the potential profits and the size of the investment for 243 payline slots. Since you win when identical symbols appear anywhere on the reels, it is vital to bet larger amounts if you hope to win big. Volatility is essential because you need to stay afloat long enough to reap the benefits of the best 243 payline slots without going bust. A game with a high return to player will give you the opportunity to win often in anticipation of those big profits.

Speaking of volatility, 243 payline slots online are preferred to regular games which only pay on the active pay line. Variance is lower here and this benefits casual punters and beginners who have smaller amounts to invest. It makes perfect sense to try the free online slots using virtual currency provided by the casino, before you make a deposit and gamble for real.

Some of the best 243 payline slots

There are hundreds of 243 payline slot machines supplied by niche (like Amatic and its Party Time slots) and established software providers including some of the best looking 3D slots. These 10 are the ones we regard as the very best.

1️⃣ The Dark Knight Rises – developed by Microgaming, this game is inspired by the Batman comics and Hollywood blockbusters. It is a game with a high return to player and wild symbols that trigger multipliers, plus an exciting bonus round.

2️⃣ Thunderstruck II – Microgaming fans who enjoy 243 ways slot machines inspired by Norse mythology will appreciate this game. It is the second installment in the franchise, after Thunderstruck slot, a mobile friendly game with free spins and the gamble feature.

3️⃣ Game of Thrones – one of the best 243 ways to win slots developed in recent years, it pays tribute to the HBO TV series. It has multiple winning combinations, exceptional graphics and a soundtrack that will instantly appeal to those who watch the film.

4️⃣ Terminator 2 – 243 ways to win slots fans who also enjoy the Terminator franchise can spin the reels of a game inspired by it. Scatter symbols produce free spins during which profits can be multiplied and then gambled by ambitious players to maximize winnings.

5️⃣ Immortal Romance – Microgaming’s finest game dedicated to vampires was so popular that it led to a sequel. The original is preferred by most players because of its high RTP and frequency of free spin rounds triggered by scatter symbols.

6️⃣ Narcos – another game inspired by TV series, Narcos takes players on an epic voyage that sees has them explore the realm of ruthless drug dealers. Those courageous enough to embark on this quest will be paid a lot and with a high frequency, while enjoying exceptional graphics.

7️⃣ Book of Gods – players can try the free 243 payline slots are dozens of online casinos to experience the immersive nature of this game. It invites them to challenge the almighty gods and those who are bold enough to do so can rake big profits with low variance

8️⃣ Jurassic Park – if you enjoy the movies describing the park where dinosaurs roamed free, you will surely appreciate the 243 ways to win slots in the franchise. The graphics are amazing and sound effects quickly get players immersed into the setting, while high payouts keep them happy.

9️⃣ Avalon II – Microgaming’s second 243 ways to win slots in the franchise tells the story of King Arthur and the Holy Grail. It is a beautiful game optimized for mobile devices and paying with a high frequency, while producing generous winning combinations.

🔟 Twin Spin – this is one of the most dynamic game for those who understand the 243 ways to win slots payline breakdown. It dishes out free spins often and during these bonus rounds profits can be multiplied, so punters hit two birds with one stone.

Tips for winning with 243 ways slots

NetEnt and Microgaming were among the first software developers to introduce the 243 ways slots and they continue to dominate the market. Microgaming recently released, together with Triple Edge Studios, an Alice in Wonderland slot named Absolootly Mad – Mega Moolah. When you play games from these two suppliers, as well as other companies offering free slots 243 ways to win you don’t have to pay for all the winning combinations.

👉 That’s why the first tip is to be courageous and bet larger amounts than you would normally do on slots with only a few pay lines. This will make you eligible for bigger profits if you hit the winning recipe.

👉Another thing to consider is to focus mostly on 243 payline slots that have a progressive jackpot. That’s because in exchange of the lower variance you can afford to bet larger amounts.

👉 You don’t have to keep track of the paylines and the high frequency of your wins will allow you to make the most of the special features. Check out several free 243 ways slots to see which have the biggest multipliers and which award bonus rounds more often.

Pros and cons of 243 payline slots

Your FAQs on 243 payline slots answered

243 payline slots pay whenever players discover identical symbols anywhere on the reels. By comparison, payline games will only produce profits if the symbols are lined up on the active pay line.
Compared to regular games 243 ways to win slots pay more often but the profits are reduced. It’s the trade you make between high frequency profits and smaller amounts.
You can play games with 1024 and even 4096 ways to win. There are also Megaways games that can produce in excess of 100,000 winning combinations.
Flash technology has been discontinued at the end of 2020, so 243 ways slots are no longer available.
NetEnt and Microgaming are famous for producing some of the best 243 ways to win slots. Other software developers like Pragmatic Play, Quickspin or Yggdrasil have also invested in creating such games.

243 ways slots have opened a new chapter to online gambling by providing players with the chance to win much often. If you spin the reels of these games, you will trigger winning combinations with a higher frequency and will have to worry less about volatility. Some of the best paying progressive jackpot slots have this structure, so not only will you win more often, but also have the chance of winning big. The best software developers are behind 243 payline slots and you’ll find their creations and hundreds of casinos.