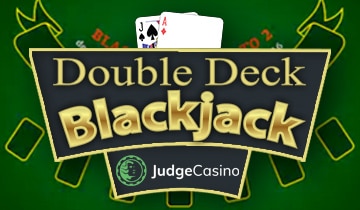 Some online casino games have remained unchanged since they first appeared. For many years, blackjack was one of those.

However, in the last 50 or so years, the game has undergone many tweaks, creating a whole array of different variants for you to play. Double deck blackjack is one such example.

Without further ado, let’s see if we can teach you how to win playing 2-deck blackjack.

Before we delve into the truly nitty-gritty aspects of the game, you need to understand the most elementary aspects of double deck blackjack rules. As players may have gathered, this is a game which is played with two decks, as opposed to the one deck in standard blackjack, and as many as 6 or more decks in other variants.

Almost all the other rules in this blackjack game are the same as you will find in most other blackjack variants. However, there are a few reasons why blackjack players may wish to choose 2-deck blackjack over its counterparts.

Is This Game Better Than Other Variants?

First, let us look at how the game compares to standard blackjack and another popular variant, 6-deck blackjack.

Going Up Against the Competition

When compared to standard blackjack, players may find it a touch trickier to count cards in double deck blackjack online. The more decks there are, there more difficult the process will be. However, the odds of counting cards in 2-deck vs. 6-deck blackjack are considerably better.

Other twists and turns such as the subtle rule changes listed earlier, generally lower the house edge in this game, as opposed to single deck blackjack.

The Perks of Playing Blackjack with Two Decks

In double deck blackjack, the dealer must stand on a Soft 17. This will likely prevent them from hitting a 2, 3 or 4 on their next hit, lowering the house edge by around 0.22%. Players can also drop the house edge by another 0.11% by being allowed to double down on any two cards. Splitting aces also gives players a slight boost, by ensuring that they won’t be stuck with hands such as 12 through 16 when they might easily bust if they hit again.

Compared to playing with four, six or eight decks, which have house edges of 0.61%. 0.67% and 0.70%, respectively, the subtle changes in rules mean that double deck blackjack is played with a house edge of around 0.42 – 0.45% when using basic strategy. Other tweaks on the rules and various adjustments (as mentioned above) can see it drop to approximately 0.20%.

The Odds of Landing a Blackjack

Many players will want to know the probability of being dealt a 21 in 2-deck blackjack. There are several different versions of the two-deck game, so double deck blackjack odds do vary from title to title.

Some games will feature the surrender rule, and others have no surrender rules in play. The only way to find out the true blackjack odds for 2-deck games is to study a strategy chart, and that is where this article is heading next.

The basic idea of these strategies is to tell players what to do if they land a certain hand. Ideally, you’ll want to memorise strategies such as basic strategy and implement into gameplay.

Most blackjack strategies appear in chart format. A typical blackjack chart for 2-deck games will look much like many other strategy charts. In short, there are is a grid of possible hand combinations for both your hand and the dealer’s.

Inside the 2-deck blackjack strategy card, there will be a series of coloured boxes, denoting hit, doubling, stand, split, surrender, and so on. It is ideal if players study these charts and if possible, memorise them.

When playing blackjack online games, take note of the value of your hand, and that of the dealer. You can then cross reference those hands with the ones on the chart. Doing so should inform you as to what your best course of action is likely to be.

By studying and memorising a blackjack 2-deck strategy chart, you can then implement those actions into your gameplay.

Card counting may be easier in single deck blackjack than in 2-deck blackjack. However, it is much simpler in this game than in blackjack games played with more decks. As you will be aware, the trick to counting cards is to estimate what cards remain left in the shoe as the game is played.

There are plenty of card counting resources out there on the net which can help you learn how to count cards in 2-deck blackjack. However, we can point you in the right direction to start off with, which might just lead to speedier double deck blackjack card counting.

The best way to count cards in 2-deck blackjack is to use a no fuss, minimal hassle system, and we’ll look at one of the favourites amongst double deck blackjack players now.

Which System Is the Most Ideal to Use?

One of the better blackjack 2-deck systems to use is the KO system, also known as the Knockout Card system.

With the KO system in blackjack 2-deck games, every 2, 3, 4, 5, 6 or 7-point card counts as +1. Aces and tens count as -1. Players increase the value of their stakes when the count is positive and decrease it when the value is negative. That’s about all there is to it.

A Few Other Tips and Tricks

Blackjack players will also come across a few other 2-deck blackjack tips when playing online. If card counting in double deck blackjack isn’t your cup of tea, we have a few other tips and tricks you can work into your game. Some of these include:

Where Can I Find Double Deck Blackjack Games?

As mentioned above, the most ideal way to effectively use double deck blackjack strategy (without memorised it) is to play online. So, who provides two-deck blackjack games at online casino sites which you can play?

Quite a few software providers have dabbled in online blackjack. Bovada’s in-house and proprietary software, and Cryptologic are responsible for the game appearing at leading US casino sites.

At European and other worldwide domains, Microgaming’s European Blackjack is essentially a two-deck blackjack game. Live dealer blackjack games can be played in single deck or multi-deck variants, although the latter primarily consist of 4, 6 or 8-deck games, not double deck blackjack, at this moment in time.

Playing 2-deck blackjack online is certainly advised before trying your hand at the game for real money in land-based casinos. It gives you more time to get to grips with 2-deck blackjack strategy and should help you learn the ins and outs when opting to play this popular variant.

Inevitably, some players are going to favour the traditional single deck game or those which feature 4 or more decks. However, give it a go by checking out the top array of casinos we feature on our page.

If you’re a skilled blackjack player who likes a surplus of betting options and the chance to slap down the house edge, there is every chance that double deck blackjack will appeal to you.